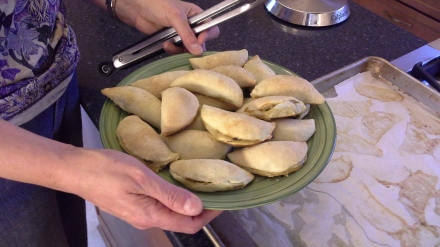 We hosted an early Cinco de Mayo party at our house last night with three other couples: guacamole, flan, tamales and chiles rellenos were brought, and we made (another) flan and empañadas. I made two fillings — a traditional picadillo made from beef, and a greens and cheese one — the latter mainly because we have a vegetarian in our dinner group, but they came out very tasty.

I know I’ve had greens-and-cheese empañadas, but most of the recipes I found online were distinctly not Mexican in flavors: using mozzarella and ricotta cheeses, for instance.  So I started with some of those, a little reference to Rick Bayless, and some imagination. I might mince a fresh chile next time, but these came out delicious.  The picadillo filling is mostly the recipe in Diana Kennedy’s Oaxaca Al Gusto — a beautiful coffee-table book with a terrible index, except I started with ground meat instead of stewing cubes of beef and pork, spiced it up a bit, and left out the raisins.

The dough comes from our most reliable cookbook, Nicole Routhier’s Cooking Under Wraps — there’s not a single dish we’ve made from that book that isn’t an instant success, and the doughs in particular are nearly foolproof. We made a double batch of dough which proved about 25% more than I needed to fill the empañadas, but I was a little short on the filling for the greens — the recipe below should use up all the dough.

Recipe: Empañadas of Beef and Greens

Do-ahead: Assemble the pastries and freeze them. The baking time does not change significantly. They also reheat in the oven if they’ve already been baked.